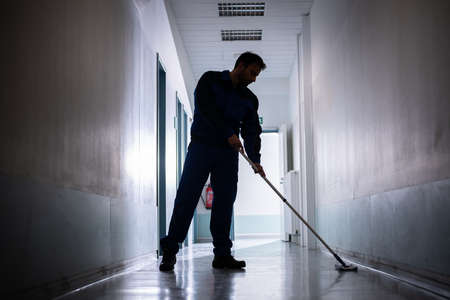 He starts each day with a fresh bucket of water early in the morning, often beating the rising sun. “Begin each day anew”, he repeats as he commences the day cleaning the hospital floors. He follows the same path each day – start in the atrium, where the patients and families enter the hospital, proceed to each ward one after another, starting with the wards closest to the atrium, and finish at the wards farthest out.

His work, slow and methodical, never seems rushed or languished through indifference, always consistent and persistent throughout the day.

As the longest tenured employee of the hospital, he accumulated many names and titles over the years: buddy, janitor, custodian, and even sanitation engineer. The names and titles change depending on the management in charge. But his work does not despite decades of experience.

His real name is Paul, though hardly anyone would know that aside from the payroll manager. Whatever semblance of a family he has left is in the mop, broom, and bucket he ferries along the wards while cleaning.

He may not look like much, at least not by how we judge each other. Back hunched, covered in a disheveled, stain-ridden gray jumpsuit, he can be easy to ignore. But his appearance belies the piercing eyes of a focused gaze. He sees much in his daily journey. And each day offers new observations for his ever vigilant eyes.

At the beginning of the day while cleaning the atrium floor, he sees a couple carrying a toddler boy. The father holds the boy in his right arm, and holds the mother’s hand with his left hand. Paul knows the only time a young child arrives this early is for surgery.

He notices the projected strength on the man’s face, expressed through a practiced, stoic demeanor, pressing his lips together and narrowing his eyes.

The mother’s face appears more vulnerable, more susceptible to the emotions forming the tempest within her. Paul recognizes the emotions of a mother aching out of helplessness, of an inability to protect her child. The emotions create a ring of tears around both eyes – not enough to pour out, but just enough to reveal their presence.

Paul knows to look at the child last, for whatever story told in the faces of the parents, the child’s face is the most honest. Children have yet to learn the art of self-deception.

The child’s face reveals a conspicuously detached acceptance. His eyes stare outward, looking nowhere in particular. The face conveys a serene tranquility that borders on the religious.

Paul sees the three faces. And through their faces, like so many times before, he knows their stories. He catches the father’s glance and nods respectfully. A silent gesture to which the father acknowledges with a nod in return, and he continues striding through the atrium as Paul continues cleaning its floors.

Later that morning while cleaning the first ward, Paul hears a woman hurrying down the hall. He recognizes the pace, the stress in each step, growing louder as it comes closer. It stems from an existential fear of the unknown about to meet long-anticipated healthcare news.

Paul calmly moves aside to clear the way. He knows the pain of uncertainty. He has seen its effects on people, which can be more harmful than even the underlying affliction. As the woman hurries past Paul, she darts a quick glance out the side of her eyes.

In that moment, Paul sees it, the stress in the outer corners of her eyes, the angst in her clenched jaw, and the fear of uncertainty forming tributaries of stress, coalescing into wrinkles that line her face. Paul smiles as she passes, knowing she won’t see the smile, but hoping she feels its warmth.

Paul has seen many patients bound by the existential dread of the unknown. He sees how something initially perceived to be self-protective can then bind a person within a wall of fear. He knows the penetrating power of kindness. And he always smiles at those he finds trapped.

While cleaning the floors of a different medicine ward, he finds a group huddled intensely around an office manager. As Paul inches closer to the scene, the individual voices become more discernible. He finds two families quarreling as an office manager attempts to referee the skirmish.

“Why can’t you just wear a mask?  My aunt doesn’t have the best immune system.”

One family, originally here to support an elderly aunt for her annual wellness exam, now complains those who aren’t vaccinated should wear masks, in case they spread COVID or some other virus to patients with a weakened immune system. The second family, originally here for the mother’s colonoscopy, retorts they all recently tested negative as part of the pre-procedural screening, and don’t need to wear masks.

Two families, two different medical risks, two sides that are too far apart to reconcile – so they fight, and someone from the hospital referees, all because neither family sees in the other what they see in themselves. Paul notices these volatile interactions have occurred more frequently since the start of the COVID-19 pandemic.

He finds many patients trapped in the daily stress of living while navigating through a pandemic. They struggle to find solace in their burdens. Paul sees how they lash out when they cannot find a better outlet, often occurring at the most inopportune of times, usually at the hospital staff.

Paul moves to the opposite side of the hallway as he inches forward. He sees the fear masquerading as vitriol on the faces of the different family members. They take turns screaming at each other, hardly listening before unleashing. He remains focused on cleaning the floor, smiling at both families as he continues.

Eventually he moves far enough to where the voices blend into an incoherent cacophony, each argument sounding similar to the last.

The first administrative office is filled with boxes still unopened, the sign of a new hire – an administrator coming from a distant hospital in another part of the country, apparently renowned for his ability to reduce errors. Despite a lack of familiarity with the patient community, he was hired to improve upon some newly created metric, which defines a problem the hospital didn’t know it had prior to the metric’s creation.

This administrator looks the part enough. Fully loaded with multiple pairs of suits and matching ties that scream importance, and corresponding shoes with varying shades of leather to accentuate each suit.

Paul notices the bounce in his step, a distinct sound that makes dance partners out of his shoes and the floor. As he passes Paul to walk out of his new office, he snaps his fingers and flicks both thumbs, adding the phrase, “strong work”, before he clicks his tongue.

Paul has seen his type before, some lasting longer than others, all following the same trajectory – coming in with a bang, only to leave with an equally loud bang. To Paul, administrators like that are focused more on looking good than doing good. And when the veneer vanishes, so do they.

“All that glitters is not gold”, Paul whispers as he shifts to the next office.

He finishes his day in the farthest wards, the surgical suites, since surgeons are the last to leave. Paul admires their work ethic and dedication to patient care. Though nowadays, that dedication appears more mercenary, ever since surgeons developed a sense of self-protection.

It’s hard to notice at first, as nothing appears overtly different. But we always find the changes in the subtleties. Paul sees it in the patient waivers, the cameras in the operating room documenting the surgery, and in the piles of signatures and checklists.

It’s all quite confusing to Paul, who never understood how a surgeon can focus on both performing a surgery and preempting against all errors. Paul just focuses on doing his job to the best of his ability. And if he misses a spot, then he goes back and addresses it. But the single-minded focus on doing a good job eliminates the need for checking and signing documents repeatedly.

While cleaning the last surgical suite, he encounters a surgeon berating a technician: “this is on you, this is why I want my own staff, and not you – if this becomes a lawsuit, it’s on you!”

Recently, the hospital required all surgeons to use in-house technicians instead of bringing in their own. A cost saving measure instituted by the new administrator who sees staffing costs as a problem we didn’t know we had.

A surgery team thrives on chemistry and changing the roster inevitably disrupts team cohesion. But nobody thinks these things through. It only appears obvious to those with the eyes to see its full effects. Maybe the surgeon is being unreasonable in asking for his own staff, or maybe the administrator is oblivious to team dynamics in the operating room.

But right now, all Paul sees is the couple from the beginning of the day, far away on the opposite end of the hallway lining the surgical suites – now without the toddler. The father and mother, instead of holding hands as before, are now fully embraced, engulfed in deafening sobs of despair.

In Paul’s experience, you cannot separate cause and effect, or one person’s role from another. It all co-exists. No one seems to understand this, but it has always been this way. And no pandemic, administrator, or surgeon can change it. Just as no person or thing defines a hospital. It’s the sum of all the experiences, of all the daily interactions.

So on it goes, each day anew. Though the rhythms and sounds of each day bring a unique melody, the song remains the same – the song of life and death, of health and disease, and of treating patients – providing the highest service to humanity.

This is the song Paul hears as he cleans the hospital floors, keenly observing everything around him – serving as the hospital’s eyes.