The Chronic Disease of Debt 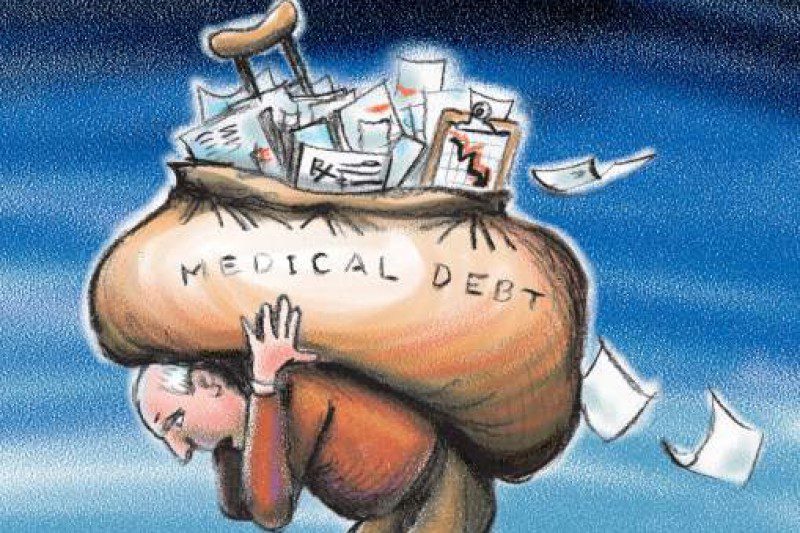 This is the state of healthcare today, beholden to the millions of Americans saddled with medical debt. Over half now carry medical debt, up from 46 percent in 2020, according to survey data from Debt.com, a consumer financial education company. Among those with debt, 75 percent of Americans owe at least $2,000 as of late 2021, driven primarily by diagnostic tests, hospitalizations, and emergency room visits.

“The majority of medical debt is owned by people who don’t have the money to pay for it,” Don Silvestri, CEO of Debt.com, said. And like all forms of debt, those who cannot pay for what is owed find themselves in collections. As a result, about 18 percent of Americans hold medical debt that is in collections, according to 2021 study from the Journal of American Medical Association (JAMA). Researchers in the study found that, between 2009 and 2020, unpaid medical bills became the largest source of debt that Americans owe collections agencies.

Americans are drowning in medical debt, and the problem has grown large enough to where policy makers are calling for fundamental reforms in American healthcare – namely healthcare insurances.

The Commonwealth Fund, a liberal think tank, conducted its own survey of medical debt to ascertain changes in patient behavior in response to it. The survey found that nearly 66 percent of adults under the age of 65 who had medical debt went without needed care. Naturally this would lead to calls for universal healthcare, or at least for expanded Medicaid coverage.

But policy makers in favor of expanded coverage options also take an additional, specious step in thinking. They believe that patients will be more engaged with their providers, or at least make more health-conscious lifestyle decisions, should the powers that be eliminate their medical debt.

Discover Financial Services, makers of the Discover Card, conducted yet another survey of patients with medical debt, and found that 44 percent defer seeing their primary care physician and 39 percent defer purchasing their medications because of existing medical debt.

These surveys and policy implications all lead to one conclusion – medical debt affects patient behavior to where patients are less willing to engage with their healthcare system. It would then follow that to improve healthcare, we should eliminate medical debt. And the easiest way to eliminate it is to expand public health insurance plans.

But debt is not so easily vanquished. Even if we hypothetically write off all the medical debt held by patients, or transfer it to government institutions that administer public health plans like Medicaid or ACA health plans, the debt would remain. Debt is a function of cost, and medical debt is the cost of healthcare – someone or something has to bear it.

When patients bear it, we observe changes in behavior and decry the effects of debt. But we do not give the same consideration to other institutions that may find themselves on the receiving end of medical debt.

We look at medical debt in terms of behavior when it is held by patients, though we only look at it in financial terms when considering other entities that bear it. But debt is best understood in terms of the behavior it elicits among all who carry it.

Hospitals that bear debt use litigious means of extracting payments to reduce their debt. Insurance plans that carry excess bad debt, or debt unlikely to be paid off, restructure their coverage plans either with a higher deductible or with less clinical services included. The combined effects of which result in the same outcome – medical debt is transferred back onto the patient.

Debt in healthcare is not a problem of insurance coverage. It is a feature of the healthcare system, laced within the fabric of how it operates in the United States. It inevitably falls on the patient to bear, no matter how much we jigger with the system.

If we want to solve the problem of medical debt, then we have to think more fundamentally about what costs mean in healthcare. This is hard to do, much less to even conceptualize. And like most difficult issues, we change it into something more palatable. So we look at the issue of medical debt in terms of victims and villains – and place blame where it is most convenient to do so.

Instead, we should reexamine the system itself, study why healthcare costs are what they are. So we can see what we can do about medical debt.

As it currently stands in our modern healthcare system, costs create debt, which gravitates toward the patients. Any attempt to shift debt away from them will simply revert back into the patients’ pocketbook over time.

We cannot reduce debt without altering the calculus of costs. This is a difficult problem. And it is really why the problem of medical debt is difficult to resolve.