I joined an abortion clinic protest

by Jay K Joshi
in Perspectives
1 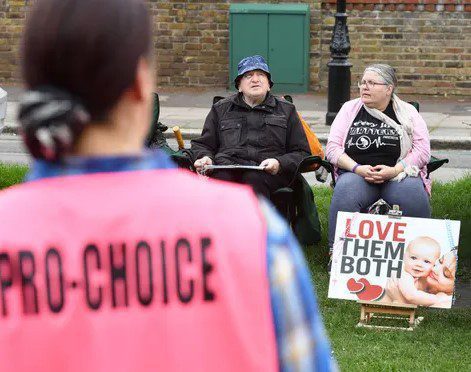 I went to an abortion clinic where pro-life activists were standing outside. I spoke to them and I learned their stories. And I learned why they advocate against abortion as strongly as they do.

As someone who practices clinical medicine, it was interesting to garner their perspective. They emphasize the life of the baby and see women seeking abortions as victims.

“I’ve seen women forced by their parents or their boyfriends to go into that abortion clinic.”

“Nobody ever thinks about the unborn children. Nobody ever speaks for them. We are here to speak for them.”

These were just two of the most poignant messages conveyed by the protesters. The ‘here’ she refers to is an abortion clinic in Dupage County, IL, roughly an hour west of Chicago. It is a Democratic county, heavily influenced by liberal politics. The quoted protesters are from rural Wisconsin, a Republican stronghold about five hours away. A variety of overtly Christian, pro-life organizations scattered throughout the Midwest financed the trip.

I learned all of this through a slew of paperwork I received while speaking with the protesters. I got a pamphlet from the Thomas More Society requesting small businesses to take part in a pro-life lawsuit. I got a handout listing various pregnancy assistance programs. I got stickers, business cards, and, of course, photos of aborted fetuses. Most of these had the names of various Christian saints and came from organizations in more rural, more Republican parts of the Midwest.

It was an immediate and obvious juxtaposition of politics and religious beliefs. The protesters may have espoused Christian beliefs, namely of protecting life and family, but in implementing their beliefs – through a protest – they demonstrated overt political intonations – ones that differed from the local politics where the abortion clinic was located.

But every argument seemed to pit the child against the mother. The protesters believed the rights afforded to the mother came at the cost of the child. I then asked if there was a balance between the rights of the mother and that of the unborn child.

“Does God compromise on sin?” was the response. Apparently, there is no balance. I found this to be the most disturbing aspect of the entire ordeal. Every protester seemed like a reasonable human being. They all spoke to me respectfully and engaged in an honest, good faith debate when I challenged their views.

But they remained steadfast in their extreme beliefs. When I asked if there was ever a medically appropriate scenario to justify an abortion, they said no. When I asked about medical emergencies a pregnant mother may face, they parsed words.

“Then it’s not an abortion. An abortion is intentionally killing an unborn child. The intention matters.”

I agree that intention matters. It is what separates a medical error from a crime, but I never heard of anyone defining abortions as either intentional or unintentional. It was a curious distinction. And if you agree with that logic, then it is easier to support the protesters.

In their minds, they are not against abortion. They are against the intentional killing of children. And the abortion clinic they were standing outside of was guilty of exactly that. Once we arrived at that logic, one protester who described herself as a reformed nurse provided a list of code violations from past government inspection reports, detailing every administrative infraction on the abortion center we were outside of.

“Patients did not receive postoperative counseling.”

“Sink fixtures were not hands free, which posed an infection control risk to all staff and patients.”

“Facility’s infection control officer failed to ensure the surveillance of sterilization was conducted according to policy.”

While I would never diminish the importance of regulatory compliance, I found citations were more administrative oversights than evidence of any ill intent. When I asked her as much, she chided:

“Then why don’t they provide any counseling? Don’t they care about their patients? All they do is perform abortions, make money off women, but after that’s done, they just leave them. We provide counseling. We actually care about the baby and the mother.”

It was an interesting spin on the violations in the inspection report. But it was hard to overlook the leaps in logic. Nevertheless, I understood the overall line of thinking: identify administrative violations or complaints, and infer intention out of it. It is a political connect-the-dots and a tried-and-true strategy of politicizing anything healthcare-related.

Turn the clinical procedure into a fight over rights and pit each individual’s rights against one another. Use administrative oversight to deduce ill-intent.

After we reviewed the code violations, the reformed nurse protester handed me a document that listed multiples flaws associated with SB 25, better known as the Reproductive Health Act (RHA), the recently passed legislation that made Illinois a destination for out-of-state patients seeking abortions. It was rife with conspiracies.

“The RHA eliminates all licensing requirements for abortion clinics.”

“The RHA eliminates all health and safety inspections for abortion clinics.”

“The RHA allows non-physicians to perform abortions, both surgical and medical.”

“The RHA allows dismemberment abortions of “preemie” babies, who feel pain, without anesthesia.”

Within the sensationalized claims were talking points turning abortion into a matter of rights, specifically whether it is a fundamental right; and if so, where it ranks relative to other liberties.

“This new ‘right’ is higher than our right to free speech, at least under the Illinois Constitution.”

At first, the sentence made little sense, ranking abortion rights over the freedom of speech. But when you look at the concept of rights as the Supreme Court did when it ruled against the right to privacy as the basis of abortion, it all fits together.

The Supreme Court inferred that health laws have a hierarchy, even if there is no direct precedent connecting them. Centuries old Common law ranks above Case law created in modern courts, since the former serves as the basis for the Constitution and the latter derives its authority from it. By that logic, the former must be above the latter.

It is hard for those in healthcare to think of ranking rights and the laws that oversee them like this. No such concept exists for medical conditions. Perhaps that is the point.

When we characterize medical care in terms of rights and then rank those rights, as though some are more important than others, we reduce medicine into legal rhetoric. Nobody thinks that hypertension ranks higher than obesity, but when you assign a right and rank to each medical condition, this is what you end up with.

Maybe that is what the protesters want. More likely, they are hapless pawns rehashing rehearsed talking points and doing the bidding of those with political power.

Father, forgive them, for they know not what they do.