Healthcare Has Always Been Political 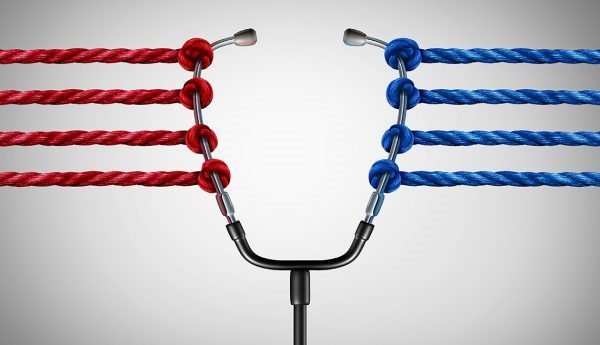 The Hippocratic Oath is not what you think it is. It was never intended to define the responsibilities of a physician. Rather, it was written by students of Hippocrates to distinguish their training from other physicians who were trained elsewhere.

Think of it like antiquity’s version of branding. It gave physicians practicing the Hippocratic method a competitive advantage in the clinical marketplace of patients.

Flash forward two millennia and not much has changed. In late nineteenth century, many for-profit medical schools were sprouting throughout the country, producing medical students of poor quality in droves. To standardize the curriculum, ostensibly to improve the quality of medical education, the Carnegie Foundation for the Advancement of Teaching appointed academician Abraham Flexner. In 1910, he presented Medical Education in the United States and Canada, a report that defines North American medical curriculum to this day.

Dr. Rudolf Virchow, the father of pathology, succinctly epitomizes the ethos of the report: “Medical practice is nothing but a minor offshoot of pathological physiology as developed in laboratories of animal experimentation.”

The report may have standardized medical education, but its more lasting consequence was to couple medicine with science, prioritizing the biomedical model over the experiential model of medicine.

Dr. William Osler, a firm believer in the Hippocratic method of direct patient engagement, was outraged. He believed this report would remove medicine from the bedside and put it in a research facility. He was right. But the powers-that-be simply ignored his premonitions and set up a more technical, more scientific approach to medicine. Flash forward today and we see the lingering effects of this shift: medicine emphasizes pharmaceuticals as treatment and expensive procedures as therapy.

History does not repeat itself, but it sure rhymes. While never overtly proven, many believe Flexner’s report was motivated by oil barren John D. Rockefeller, who sought to convert his large storage of petroleum into novel pharmaceuticals that could be used to treat diseases that had no cure a century ago.

But in order to treat, we have to first define treatment, which implies we need data and outcomes to study. As a result, we saw the growth of biomedical medicine, which determines a particular treatment by applying the scientific method into medicine.

We do not intend to belittle recent medical advancements made by the pharmaceutical industry. Indeed, the mRNA COVID vaccines are nothing short of a miracle. But we do see a conspicuous pattern where medicine is influenced by covert political pressures under the guise of either standardizing or improving medical care.

We see it repeating itself once again when we look at today’s post-pandemic healthcare.

Never in recent memory has the country’s views on healthcare been so polarized. One study even found a physician’s political affiliation affects the quality of care provided.

It seems like all of healthcare is at the eye of the political storm. The repeal of Roe v. Wade has galvanized abortion into a voting issue. Opioid litigation continues to make headline news, right alongside escalating numbers of opioid overdoses and calls for harm reduction policies.

It seems all things healthcare are now all things political. Health disparities in patient outcomes are now acknowledged to correlate with systemic inequities in societies. Climate change is now a systemic health crisis, as per the American Medical Association.

These insights are undoubtedly important advancements in medicine. Few would argue otherwise. But we must be wary of the underlying motivations that drive them. They appear decidedly political.

Healthcare has always projected an idealistic front, but the underlying factors that influence its advancements have usually been political in nature – whether it was the students of Hippocrates seeking a competitive advantage or an industry-funded academic report.

We must not lose sight of this as we continue to mold a post-pandemic model of healthcare. It remains far too political to solely focus on patient care. It seems like healthcare is a branch of politics instead of an independent entity.

As it currently stands, to predict trends in healthcare, watch how the political winds blow. They carry the sails of healthcare. This is the problem.