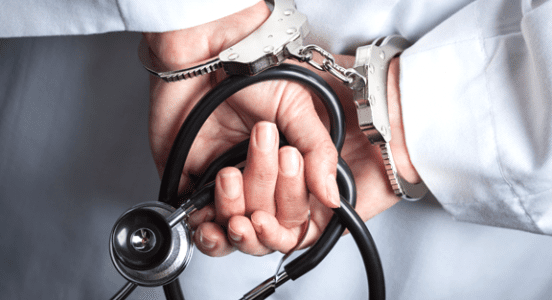 The CDC and DOJ make for curious bedfellows. Ostensibly, they are different organizations. One is a national health agency under the Department of Health and Human Services (DHHS). The other enforces federal laws set forth by Congress.

Few would imagine healthcare and law have much in common. But few would have imagined such a pandemic in today’s world. Suddenly, personal health became public policy and individual health choices became legal mandates. Health and law blended in ways few could have predicted.

“It’s just, I think, important for me to explain the role of the Justice Department, which is not to make judgments about public health, but rather to make determinations of whether the programs and requests of the agencies that are responsible for those are lawful,” Attorney General Merrick Garland told Senator Susan Collins, a Republican from Maine, when discussing mask mandates.

But what is a law if not a judgment on individual behavior? If someone knows the speed limit and drives in excess of it regardless, is that person not making a judgment on whether to obey the law?

The linguistic gymnastics we see from policy makers of late belies an uncomfortable reality – the CDC and the DOJ parlay the resources of each respective organization to set forth and enforce public health policies as de facto laws. This is the root of their intimacy. And attempts to differentiate each department’s role by parsing the difference between policy and law in vague terms is nothing more than privately rehearsed pillow talk passing as rhetoric for public talking points.

As with most things health policy related, the pandemic made apparent what was always present in the federal government. In fact, this curious relationship between the CDC and DOJ began nearly a decade ago, during President Obama’s administration – at the beginning of the hysteria surrounding the opioid epidemic.

It was then we first heard cries about the opioid epidemic that have now become familiar. President Obama’s administration began driving massive funds toward federal organizations enacting and implementing policies designed to curb the opioid epidemic – including the CDC and the DOJ – as though the two had equal parts to play in combating it.

Out of those funds, the DHHS initiated the Strategic Prevention Framework for Prescription Drugs, which eventually led to the 2016 CDC opioid prescribing guidelines.

Today, law enforcement agencies monitor data from PDMPs using the 2016 prescription opioid guidelines to gauge which prescribers are deemed high risk. It is openly acknowledged that the CDC and DOJ collaborate toward one coherent public health policy when it comes to opioids, even if neither admits as much.

One uses the court of law to enforce policies set forth by the other, advancing like pieces in a chess move gambit.

Now, we have the CDC openly advocating the DOJ to enforce its policies and the DOJ actively participating in public health policy set by the CDC.

The manner in which the CDC and DOJ continue to collaborate over the opioid epidemic provides insight into how the two organizations have collaborated over pandemic related issues, particularly mask mandates. And will continue as long as the pandemic lingers. But eventually the pandemic has to subside – whether that is in a few weeks or a few months.

What remains to be seen is how the relationship will disentangle – or whether it will at all. The opioid epidemic and the COVID pandemic introduced unique societal problems, prompting a bizarre relationship between health policy and law enforcement through a series of government initiatives.

That with regard to actual clinical outcomes has produced mix results at best. The opioid epidemic continues to rage, even worsening during the pandemic. Public trust in the CDC is now at historical lows. Physicians actively question CDC decision-making with their patients. We see every CDC policy through the lens of its unintended effects instead of its actual policy implication.

Perhaps what we need is less collaboration and more Federalism; less intimacy and more clearly defined initiatives that provide a much needed separation between these departments.

Laws define clear parameters around well-established behavior. Polices guide behavior in situations where ambiguity exists. How we can turn health policies into laws when the pandemic is ambiguity incarnate? Even the DOJ acknowledges it struggles to understand what is truly legal.

But power by nature rarely cedes itself. When confronted with limitations, the CDC, instead of acknowledging what it does not know, simply finds the means to enforce what it believes to be true – assuming what it knows to be all that there is to know – or phrased more succinctly, CDC policy ergo DOJ law.

Which may make for a good relationship between the two departments, but it makes for bad policy and even worse law.