Why the Opioid Epidemic is Poorly Reported Thoughts are like sounds that fill the void in our heads. This makes our mind an echo chamber, ceaselessly repeating what it already knows, until what it knows becomes all that there is to know.

The stronger the belief, the stronger the echo – which is why when we hold strong opinions about something, we struggle to change it. The echo is too loud to allow for anything else to come in.

The analogy epitomizes why journalists struggle to depict the overdose epidemic. The preexisting beliefs are too strongly held, and the echo chambers are dialed up too loudly. There are few narratives more powerful than a grieving mother mourning the fatal overdose of her first-born son.

Who can blame the families of those who lost their lives to overdoses? It is an all too human tendency to look for someone or something to make sense out of the tragedies unfolding across America.

It appears most noticeably when we survey our beliefs and analyze the aggregated responses over time. We see how polarized our beliefs over opioids have become. In a series of surveys conducted internally at Daily Remedy, we found a stark trend towards extreme beliefs.

When we asked how much the opioid guidelines have harmed patients with substance use disorders, over two-thirds responded that the harm affected such patients, “a great deal”, or “none at all”, the two most extreme responses. 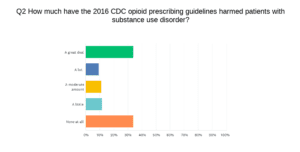 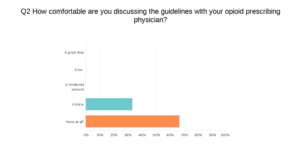 These trending responses indicate that the opioid epidemic has polarized public perception of opioids to where the only viable perspective is the most extreme one. It affects how people look at opioid use and the federal response to the overdose epidemic. Patients are both fearful and disillusioned. They fear the consequences of discussing how the guidelines apply to their individual pain. And they know physicians are weighing the legal and regulatory ramifications of any clinical decision when treating them.

We see this in the skewed responses from the public over the CDC’s attempt to rectify the opioid prescribing guidelines, revealing just how jaded the public has become to the federal government’s role in healthcare. Even an open attempt to address errors in the prescribing guidelines garnered mostly skeptical responses from a public still reeling from the chilling effects that government encroach has had on patient care.

Patients with chronic pain or substance use dependencies simply do not trust the federal government. And once trust was lost, patients grew weary of any government intervention, no matter how well intentioned. Even the Supreme Court, which has shown a tendency to favor patient autonomy and protect physician rights, mustered only a slight tilt away from the overtly skewed responses previously seen. 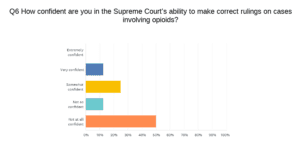 While some think the Supreme Court will rectify many of the wrongs perpetuated by the Department of Justice, the majority hold a similarly jaded position for the high court.

The sentiments expressed carry lingering consequences, as what we read reflects what we believe. And as what we believe grows more polarized, we naturally gravitate towards extreme perspectives on the opioid epidemic. The polarization is of our own making.

We see it ringing in others, but we are conspicuously deaf to our own ringing. When others share their opinions about opioids, they are perceived to be biased. But when we talk about it, we consider ourselves objective. How funny that must sound when read aloud, yet we all carry the delusion of objectivity. We pretend we are rational and use data to make decisions, but we are creatures of stories, through and through.

There is little data can do to change our beliefs. The only way we can escape the allure of polarization is by telling more stories; new narratives that can end the cognitive tyranny that the echo chambers hold over our minds.

Which are slowly percolating to the surface, as recently writers and journalists have begun to tell more accurate stories about the overdose epidemic. We know the trends many have repeated over the past decade correlating opioid prescribing with overdose mortality are specious at best, and deliberately manipulative at worst. We now know the stories of those affected by these false, prevailing narratives.

Yet we remain fixated on the original stories from the same sources. When asked how much we trust news from unfamiliar media outlets, just over one-third responded that they have “no trust” with the rest responding that they have only “a little”. People are set in how they think about overdoses and opioids. They seek familiar writers who carry similar views and support their own literary echo chamber, from writer to reader and back.

This is how we get near unanimous responses for questions like – how much have the 2016 opioid guidelines harmed patients. Nearly one hundred percent responded that the guidelines have caused a great deal of harm. 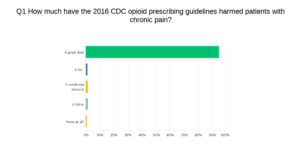 This question, like many others we have asked, may appear obvious and simple enough. But do not focus on the questions themselves, but on the patterns of responses .The patterns tell more than the actual questions or responses.

We do not get these extreme, skewed responses because we have some general agreement over the overdose epidemic. We get these responses because the views have become unbearably polarized, to where even the information we glean must match our obstinate extremism.

In such an environment, what is a journalist seeking honest narratives to do? Journalists observe society and write about what they see. But they are not immune to its musings. If a strong current sweeps the nation, journalists follow in tow. And when the echo chambers ring across the public, it rings just as loudly in the stories journalists tell.

What these surveys reveal about the state of health journalism and opioids is this – the overdose epidemic and the rigid views that have crystallized among the public are not a policy failing, nor a moral failing of society. It is, fundamentally, a cognitive failing – an inability to overcome our most base tendencies of reacting to what is most apparent.