Medicaid Enrollment Soared by 25% During the COVID-19 Pandemic

But a big decline could happen soon

by Julie Donohue
in Financial Markets
0 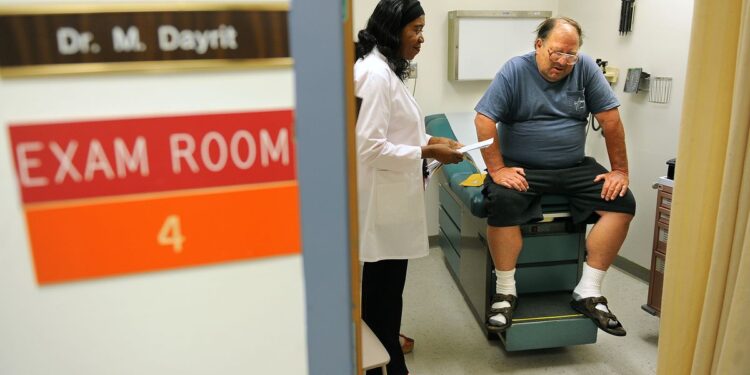 Medicaid, the government-funded U.S. health insurer for people with low incomes, grew by about 25% between February 2020 and May 2022 as policies adopted at the outset of the COVID-19 pandemic expanded the program’s reach.

All told, the number of people enrolled in Medicaid and the Children’s Health Insurance Program, or CHIP, which serves kids in families with low to moderate incomes, increased from 71 million to 89 million. That’s roughly 27% of all Americans.

The pandemic-related increase in Medicaid enrollment was slightly larger than the 24.7% increase seen after the Affordable Care Act (ACA) expanded Medicaid for adults, starting in 2014.

But unlike Medicaid expansion under the ACA, these pandemic policies are temporary. They will end once the federal government’s COVID-19 public health emergency expires. Some experts predict Medicaid enrollment could fall by as many as 15 million people when this happens, disrupting health care for many Americans.

In a new article we published in the Journal of the American Medical Association on Sept. 20, 2022, we examine how Medicaid serves Americans, analyze the program’s importance for health equity, and assess how Medicaid grew and changed during the COVID-19 pandemic.

As health policy researchers, we believe that Medicaid’s growth since 2020 highlights the program’s importance during economic and public health crises. It also underscores how painful the unwinding of these pandemic policies is likely to be to those who may end up uninsured.

In March 2020, Congress passed the first of several large spending packages, called the Families First Coronavirus Response Act. To help states shoulder increased Medicaid costs associated with the pandemic, that measure increased the share of Medicaid spending the federal government pays for by 6.2 percentage points in all states.

The extra federal money for Medicaid came with an important requirement: states accepting funds could not remove anyone from Medicaid who was enrolled as of March 2020 or gained Medicaid afterwards – as long as the official public health emergency, first declared on Jan. 31, 2020, remained in effect. These policies also applied to CHIP.

All 50 states and the District of Columbia accepted the higher federal payments in exchange for keeping Medicaid enrollment stable during the pandemic.

These changes helped to address longstanding instability in Medicaid coverage for many people. Before the pandemic, nearly 25% of those with Medicaid would enter or exit the program each year as their short-term circumstances changed.

People would lose Medicaid coverage when their income ticked up, their family circumstances changed, they aged out of CHIP, or they failed to complete required paperwork. Losing Medicaid coverage can lead to someone ending up without any health insurance at all, which increases the likelihood they will postpone or never get needed care. Having the same people frequently entering and exiting the program also increases the program’s administrative costs over time.

Changes to Medicaid policy in response to the pandemic made it much easier for everyone enrolled in Medicaid to keep their coverage. To illustrate, just over half of Wisconsin’s Medicaid growth in 2020 came from that state keeping existing enrollees in the program who might otherwise have lost coverage for at least a few months.

Young adults, especially those aged 18 and 19, and Americans who recently gave birth are two groups that benefited from this change in Medicaid policy.

Even with many aspects of daily life getting back to normal, and President Joe Biden’s comments to the media about the pandemic being “over,” the official public health emergency that spurred Medicaid enrollment growth still remains in force.

When the government renewed the declaration for the 10th time in July 2022, it set a new expiration date of Oct. 13, 2022. The administration also said it would provide states with 60 days notice before it would end the federal emergency declaration, which suggests the declaration will be renewed at least one more time.

When the emergency ends, states will have to reevaluate eligibility for everyone with Medicaid within 12 months. Extra federal funding for states will also end.

These changes will have profound consequences. Millions of people will have to reestablish their eligibility for Medicaid and are at risk of losing coverage if they do not complete the required paperwork on time.

The administration may ultimately decide to renew the COVID-19 emergency declaration again, as hundreds of Americans are still dying daily from the disease. Keeping it in place would prevent a massive drop in Medicaid enrollment and make it easier to continue other COVID-19 public health policies, such as making free COVID-19 testing and vaccinations widely available.

Beyond extending the public health emergency, we believe that states and the federal government can seek new ways to minimize disruptions in coverage and to make Medicaid more accessible to the millions of Americans who depend on it for health insurance.

Julie Donohue is Professor and Chair in the Department of Health Policy and Management, in the Graduate School of Public Health. She is the Director of the Medicaid Research Center (MRC). She holds secondary appointments in the Clinical and Translational Science Institute and is a faculty affiliate in the Health Policy Institute. Donohue earned a PhD in health policy from Harvard University and completed a post-doctoral fellowship in pharmaceutical policy research at Harvard Medical School.