by Liz Szabo
in News
0 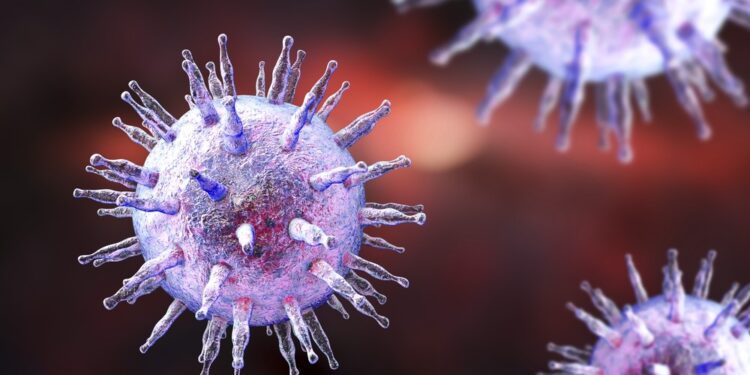 Maybe you’ve never heard of the Epstein-Barr virus. But it knows all about you.

Chances are, it’s living inside you right now. About 95% of American adults are infected sometime in their lives. And once infected, the virus stays with you.

Most viruses, such as influenza, just come and go. A healthy immune system attacks them, kills them, and prevents them from sickening you again. Epstein-Barr and its cousins, including the viruses that cause chickenpox and herpes, can hibernate inside your cells for decades.

This viral family has “evolved with us for millions of years,” said Blossom Damania, a virologist at the University of North Carolina-Chapel Hill. “They know all your body’s secrets.”

Although childhood Epstein-Barr infections are typically mild, exposure in teens and young adults can lead to infectious mononucleosis, a weeks-long illness that sickens 125,000 Americans a year, causing sore throats, swollen glands, and extreme fatigue. And while Epstein-Barr spends most of its time sleeping, it can reawaken during times of stress or when the immune system is off its game. Those reactivations are linked to a long list of serious health conditions, including several types of cancer and autoimmune diseases.

Scientists have spent years trying to develop vaccines against Epstein-Barr, or EBV. But recently several leaps in medical research have provided more urgency to the quest — and more hope for success. In just the past year, two experimental vaccine efforts have made it to human clinical trials.

First, the Epstein-Barr virus has been shown to present an even greater threat. New research firmly links it to multiple sclerosis, or MS, a potentially disabling chronic disease that afflicts more than 900,000 Americans and 2.8 million people worldwide.

The journal Science in January published results from a landmark 20-year study of 10 million military personnel that offers the strongest evidence yet that Epstein-Barr can trigger MS. The new study found that people infected with Epstein-Barr are 32 times as likely as people not infected to develop MS.

And shedding new light on the mechanisms that could explain that correlation, a separate group of scientists published a study in Nature describing how the virus can cause an autoimmune reaction that leads to MS. The disease, which usually strikes between ages 20 and 40, disrupts communication between the brain and other parts of the body and is often marked by recurring episodes of extreme fatigue, blurred vision, muscle weakness, and difficulty with balance and coordination. At its worst, MS can lead to impaired speech and paralysis.

Amplifying that newfound urgency, several new studies suggest that reactivation of the Epstein-Barr virus also is involved with some cases of long covid, a little-understood condition in which patients experience lingering symptoms that often resemble mononucleosis.

And just as crucial to the momentum: Advances in vaccine science spurred by the pandemic, including the mRNA technology used in some covid vaccines, could accelerate development of other vaccines, including ones against Epstein-Barr, said Dr. Peter Hotez, dean of the National School of Tropical Medicine at Baylor College of Medicine. Hotez co-created a low-cost, patent-free covid vaccine called Corbevax.

Some researchers question the need for a vaccine that targets a disease like MS that, while debilitating, remains relatively rare.

Eliminating Epstein-Barr would require vaccinating all healthy children even though their risk of developing cancer or multiple sclerosis is small, said Dr. Ralph Horwitz, a professor at the Lewis Katz School of Medicine at Temple University.

Before exposing children to the potential risks of a new vaccine, he said, scientists need to answer basic questions about MS. For example, why does a virus that affects nearly everyone cause disease in a small fraction? And what roles do stress and other environmental conditions play in that equation?

The answer appears to be that Epstein-Barr is “necessary but not sufficient” to cause disease, said immunologist Bruce Bebo, executive vice president for research at the National MS Society, adding that the virus “may be the first in a string of dominoes.”

Hotez said researchers could continue to probe the mysteries surrounding Epstein-Barr and MS even as the vaccine efforts proceed. Further study is required to understand which populations might benefit most from a vaccine, and once more is known, Hotez said, such a vaccine possibly could be used in patients found to be at highest risk, such as organ transplant recipients, rather than administered universally to all young people.

“Now that we know that Epstein-Barr is very tightly linked to MS, we could save a lot of lives if we develop the vaccine now,” Damania said, “rather than wait 10 years” until every question is answered.

Moderna and the National Institute of Allergy and Infectious Diseases launched separate clinical trials of Epstein-Barr vaccines over the past year. Epstein-Barr vaccines also are in early stages of testing at Opko Health, a Miami-based biotech company; Seattle’s Fred Hutchinson Cancer Center; and California’s City of Hope National Medical Center.

Scientists have sought to develop vaccines against Epstein-Barr for decades only to be thwarted by the complexities of the virus. Epstein-Barr “is a master of evading the immune system,” said Dr. Jessica Durkee-Shock, a clinical immunologist and principal investigator for NIAID’s trial.

Both MS and the cancers linked to Epstein-Barr develop many years after people are infected. So a trial designed to learn whether a vaccine can prevent these diseases would take decades and a lot of money.

Moderna researchers initially are focusing on a goal more easily measured: the prevention of mononucleosis, which doubles the risk of multiple sclerosis. Mono develops only a month or so after people are infected with Epstein-Barr, so scientists won’t have to wait as long for results.

Mono can be incredibly disruptive on its own, keeping students out of class and military recruits out of training for weeks. In about 10% of cases, the crippling fatigue lasts six months or more. In 1% of cases, patients develop complications, including hepatitis and neurological problems.

For now, the clinical trials for Epstein-Barr immunizations are enrolling only adults. “In the future, the perfect vaccine would be given to a small child,” Durkee-Shock said. “And it would protect them their whole life, and prevent them from getting mono or any other complication from the Epstein-Barr virus.”

The NIAID vaccine, being tested for safety in 40 volunteers, is built around ferritin, an iron-storage protein that can be manipulated to display a key viral protein to the immune system. Like a cartoon Transformer, the ferritin nanoparticle self-assembles into what looks like a “little iron soccer ball,” Durkee-Shock said. “This approach, in which many copies of the EBV protein are displayed on a single particle, has proved successful for other vaccines, including the HPV and hepatitis B vaccine.”

Moderna’s experimental vaccine, being tested in about 270 people, works more like the company’s covid shot. Both deliver snippets of a virus’s genetic information in molecules called mRNA inside a lipid nanoparticle, or tiny bubble of fat. Moderna, which has dozens of mRNA vaccines in development, hopes to learn from each and apply those lessons to Epstein-Barr, said Sumana Chandramouli, senior director and research program leader for infectious diseases at Moderna.

“What the covid vaccine has shown us is that the mRNA technology is well tolerated, very safe, and highly efficacious,” Chandramouli said.

But mRNA vaccines have limitations.

Although they have saved millions of lives during the covid pandemic, the antibody levels generated in response to the mRNA vaccines wane after a few months. It’s possible this rapid loss of antibodies is related specifically to the coronavirus and its rapidly evolving new strains, Hotez said. But if waning immunity is inherent in the mRNA technology, that could seriously limit future vaccines.

“If you close one door, the other door is still open,” Damania said. “You have to block infection in all cell types to have a successful vaccine that prevents future infections.”

Liz Szabo is an enterprise reporter who focuses on the quality of patient care and has covered medicine for two decades. Her stories about cancer and overtreatment for KHN have won numerous awards, including first place in the National Headliner Awards. She also was a finalist for the Gerald Loeb and NIHCM (National Institute for Health Care Management) awards. Before coming to KHN, Szabo covered medicine for USA Today for nearly 13 years. Her coverage of mental health and the link between poor health and substandard housing helped her earn the Victor Cohn Prize for Excellence in Medical Science Reporting in 2016. Her investigation of dangerous doctors, written while working at The Virginian-Pilot in Norfolk, Virginia, in 2002, won two National Press Club awards and led Virginia lawmakers to toughen state laws for disciplining physicians.