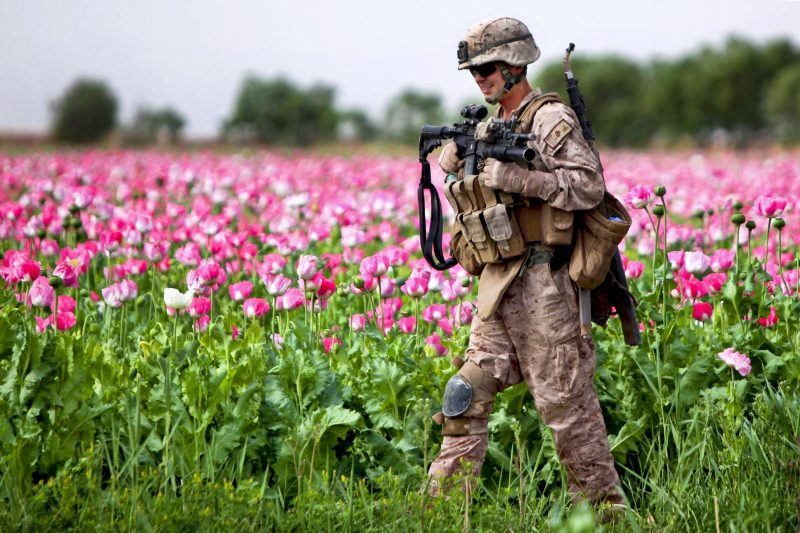 We often explain chaos theory through the butterfly effect, which states a small change can have large consequences later.

Something appearing small and insignificant somewhere or in some point in time can prove immensely consequential later or somewhere else. We have movies about it. We often reference it casually. But we miss it when it appears right in front of us.

Namely, the abrupt departure of the United States from Afghanistan – an event that will impact healthcare domestically for years to come and in ways we have yet to fully understand.

Now with the United States and its NATO allies gone, the country is run by the Taliban, an Islamic regional power we have trained since the Cold War and currently have a complicated relationship with – to put it mildly.

Initially the Taliban forbade the growth of opium. But in recent decades, the Taliban supported opium growth, even developing sophisticated production and distribution supply chains internationally.

The UNODC reports that Afghan poppy cultivation drifted upward since we began suppressing opium production in 2005 as part of our broader war on drugs.

Regardless of what we tried, Afghanistan remained the primary supplier of the world’s opium and heroin. In fact, our efforts to suppress production actually shifted production towards the Taliban.

The organization then increased opium production and used heroin sales as a revenue stream to support its military efforts. According to the United States Institute of Peace (USIP), a federal institution, we knew as early as 2009 that Afghan politics centered on opium production. And in the last two decades, much of our war efforts in the country centered on negotiating the production and distribution of opium with the Taliban and other regional military powers.

Since we are now gone, we no longer have influence over the supply of opium. This means we have little in the way of curtailing heroin production. Policy experts assume the Taliban will accelerate opium production.

But a RAND report from July 2021 casts doubt on that notion. The curiously prescient report discusses how a sharp decline in Afghan opium production would affect the Afghan economy, suggesting it would produce a humanitarian crisis and foment terrorist activities.

But the report does not suggest our recent withdrawal would lead to a decline. Rather, the authors suggest the increasing demand for fentanyl internationally would prompt a reduced demand for opium.

Fentanyl is a synthetic opiate, manufactured mostly in China or in Mexico with supplies from China. It is more potent and cheaper than opium, because it does not have the same labor costs. With cheaper costs, fentanyl is sold more cheaply on the market.

As a result, much of the heroin currently in the United States is laced with significant amounts of fentanyl. The recent wave of deaths attributed to the opioid epidemic is mostly due to the increased availability of fentanyl.

With the rise in cheap fentanyl, coupled with now unchecked market conditions in Afghanistan, we can only assume the price of heroin will decrease. The Taliban does not have the ability to manufacture fentanyl, and relies heavily on sales from heroin to support its government.

It would be naïve to expect the Taliban, which has invested so heavily in opium production, to simply stop now that the United States has left. Instead, we should assume the Taliban will continue to rely on heroin as a major export. The stability of the Taliban’s government depends on it.

The only way Taliban-produced heroin can compete against fentanyl is by lowering its price. And the only way to lower price is through an increase in supply – which means we can expect opium production in Afghanistan to increase in the coming years, because of the rise in fentanyl, contrary to the RAND report’s conclusion.

This means the United States will be flooded with high quantities and cheaper prices of both heroin and fentanyl. Previously fentanyl was used to lace heroin. Now we can expect more dynamic mixtures of the two drugs.

And we will see this in the years to come with new mixtures of heroin and fentanyl.

This is what makes the epidemic unique. On a broad scale the epidemic follows traditional principles of supply and demand. But individually, these principles break down because addiction medicine and addictive behavior cannot be understood rationally or economically. It is a medical disease.

The solution to the epidemic comes out of policies that recognize this dichotomy. But many federal institutions, such as the Drug Enforcement Agency (DEA), refuse to adjust their approach to the opioid epidemic.

They continue to see the opioid epidemic in terms of supply and demand. They criticize de-criminalization by arguing that legalizing drugs would simply flood the market with even cheaper illicit drugs.

This may be true at a broad policy level. But it is not true at an individual level. Those with substance use dependencies or outright addictions will purchase drugs that optimize their high-to-risk ratio. The greater the high relative to the risk, the more likely the drug will be consumed.

Risk comes in many forms. There is financial risk, coming from basic costs of living and other financial expenses. But there is also legal risk, derived from the criminal consequences of consuming drugs that most addicts or patients with a substance dependency prefer to avoid – even at higher financial costs.

Hence we find a discrepancy in how the clinical and legal worlds perceive the opioid epidemic. We have a unique opportunity to resolve this by examining the recent events in Afghanistan – observe the changes in Afghan opium production and prices post-withdrawal relative to the changes in opioid-based mortality and overdose-related hospitalizations in the United States.

Study the correlative factors between opium production and price internationally, and traditional metrics we use to measure the opioid epidemic. This would elucidate the specific impact of the Afghan opioid trade on the opioid epidemic in the United States.

And more importantly, demonstrate how supply changes, and the commensurate differences in drug prices affect individual behavior among those who consume illicit substances.

We should look the recent events in Afghanistan as a systemic shock to healthcare, and look for discrepancies in the clinical metrics that would indicate stronger or weaker correlations than previously assumed.

We can then understand how addicts perceive risk, and glean whether decriminalization truly lowers the price of illicit drugs.

Such analysis can dispel the prevailing, but false notions that have defined our understanding of the opioid epidemic. And once we properly understand this epidemic, we can finally enact the right solutions.