A Framework to Understand Uncertainty in Healthcare 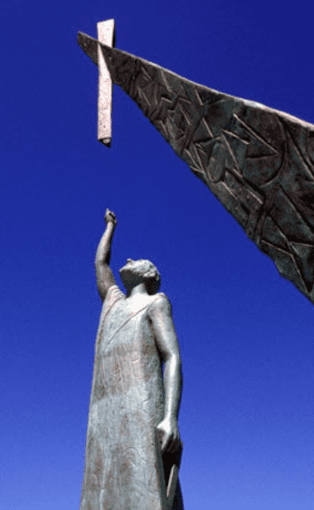 “Study the monochord”, were the famous dying words of Pythagoras, one of the most famous Greek philosophers and mathematicians in antiquity. But when he said monochord, he was not referring to an ancient stringed instrument, he was referring to the string itself – specifically the intervals, or frequencies, generated when plucked at different points along the string. An image of Pythagoras that is memorialized at the cathedral of Chartres, near Paris, France. But Pythagoras was anything but commemorated during his lifetime, as the island born Greek did much of his work far from his native home of Samos in the Aegean Sea, while imprisoned inland in the famed city of Babylon – as a hostage of war from Persian conquest. Although he is most famous for his work on triangles, his work extended to all dimensions, believing many relationships in nature can be studied as ratios, related to one another through an underlying harmony. Which can be found beneath the swirling interpretations of healthcare, through the underlying uncertainty.

Whenever we have discussed interpretations in healthcare, we highlighted the importance of awareness to discern the biases hidden within the interpretations. And absent the appropriate awareness, we simply move from interpretation to interpretation, the mental equivalent of a multilingual blending of languages, which is called a sprachbund – in which multiple languages swirl amongst one another, selectively choosing words and grammatical structures from one language or another, in an apparently disorderly manner. But the ensuing blend of language that spoken, written, and understood creates order out of the chaos – effectively how healthcare interpretations attempt to create error out of the underlying complexity.

We perceive healthcare to be an analytical, data driven field, but how we perceive the analytics, the data – the figurative atomic space around the nucleus – determines how people behave in healthcare, essentially, how healthcare really works. When we see an attractive face, we intuitively perceive it to be attractive, we don’t measure the angles and dimensions to see how well they fit. But when asked why we find that face attractive, we would reference the golden ratio (1.618) and other tangible metrics to justify our intuition. But intuition is an interpretation, rather a series of interpretations, or biases aggregated together, that appears to us as one coherent thought pattern, when it is really a complex synthesis layered upon each other.

We observed the effects of such layering at a broader level earlier when we discussed trends in the opioid and vaping epidemics – a curve in healthcare, is never a simple curve – it is almost always a complex series of complementing and contradicting trends that we innately attempt to simplify, but inadvertently oversimplify. Learning how to vape safely, or simply quitting altogether did more for vaping related mortality than any clinical intervention.

During the Coronavirus pandemic, researchers obtained government funding to study the latest trending treatment modalities which consisted of mostly retrofitting existing drugs from other clinical indications to address a specific aspect of the inflammatory process caused by the body’s reaction to the virus. But any attempt to address one specific aspect of a complex process will inevitably lead to reactions, which we saw with many earlier treatment studies.

When Gladwell referenced a study that found forty cents on every medical dollar goes towards waste or fraud, he was alluding to the inefficiencies in healthcare, but more importantly, equated two very different types of inefficiencies together in that statistic. Fraud is willful misuse, but waste is inadvertent spending on clinical services that perhaps were not necessary, in hindsight. But how can a provider discern what is clinically necessary, and moreover, how can we discern the decision-making of the provider between acts of fraud and waste, by focusing on one action or one statistic. The differences appear in the patterns of behavior, observed over time, which may appear uncertain in the present moment, or with limited information, but eventually elucidates once observed over time.

Engineers use a system called risk minimization framework, in which they start with the premise they are wrong, and work to minimize their wrongness. But being wrong in engineering is far different than being wrong in healthcare, in which the complexities of human behavior add far more variables than in more technical fields. Author Klosterman describes wrongness in both subjective and objective terms because incorrect perceptions are as critical as the inherent mistakes, and the two together come to define the full breadth of the description of the word.

A recent study on the effectiveness of tuberculosis treatment found that the effectiveness can be improved by changing the route of insertion of the medication, from injecting it directly into the skin to injecting it directly into the blood stream. The same medication, the same disease, but a more effective treatment simply by changing the nature of the interaction between the two. This analogy highlights the importance of interactions in healthcare, not just for medications, but more broadly, for all perceptions that define the interactions in healthcare.

We emphasize urine drug screens, imaging studies, and other tests to verify the need for opioid medications, and through such emphasis, perceived guideline recommendations become how we make decisions. If the urine drug screen is positive for the prescribed opioids, then you can continue prescribing opioids, if negative, then you abruptly stop. The simplistic thought pattern has limited the entire spectrum of patient care down to a relationship between medication adherence and urine screens, failing to appreciate the complexity of both pain medicine and addiction medicine. A patient who passes every urine drug test can very easily fall into patterns of addiction and a patient who struggles with legitimate pain exacerbations who did not have enough pain medications to last the full time interval between appointments may not exhibit any signs of inappropriate addictive behavior.

The behavioral shift from using tests as guidelines to overt tools in decision-making limits not only the patient encounter by reducing the complexity of patient care, but also by the inherent limitations in the test itself. Urine drug screens are well known to have false negatives, and if providers make decisions exclusively by the test results, the quality of their decisions are limited to the quality of the test results. A major problem seen during the coronavirus pandemic, in which patients clamored for tests, yet the tests were often not administered properly, or included significant errors in the test results, rendering the results questionable at best.

Yet the demand for the tests rose, despite knowing the limited value – almost as though the comfort of getting tested mattered more than the test results. Just like the comfort of testing patients put providers at ease, giving off the pretense of providing clinical oversight, but really simplifying the patient evaluation from an analysis of addictive behavior to a test result. Which then questions the actual purpose in ordering a test – primarily to guide or to replace clinical decision-making? This subtle change in thought can lead to changes in decisions, which can lead to excess urine drug testing – which can be construed as either fraud or waste, again, depending on your perspective.

Instead of focusing on making the absolute right or wrong decision, we should focus on developing the right understanding of what we know and do not know – and structure our approach to uncertainty through a standard framework. Jeff Bezos dubbed his decision to start his company Amazon as a regret minimization framework, a more conceptual variant of the regret minimization framework he likely learned as an engineering student – a play on words, but founded on applying technical principles in more abstract manners. Philosophers who studied the conceptual world of thoughts and how we become aware of our thoughts have applied principles of logic in more abstract terms, studying the formation and manifestation of thoughts, developing in the process a doubt schematization framework: a systematic approach to studying uncertainty and the thought patterns we create in our attempts to understand uncertainty.

Every experience is a multi-layered experience in which we approach experiences and create understandings that become thoughts that go on to determine our perceptions and decisions. The interpretations we form derive from this constant process of absorbing new information or observations, attempting to understand it, and then building an impression out of that understanding – a constant state of flux that Immanuel Kant called the mind’s, “free play.”

When news of the coronavirus seemed to dominate every headline on television, people began to interpret common, previously seen symptoms as potentially originating from the virus. Providers had to make sense of a broad array of symptoms, like cough and fever, and educate patients to differentiate vague symptoms from common conditions like traditional allergies or from the coronavirus – essentially helping patients interpret their own symptoms, prompting the appropriate clinical behavior based on the appropriate interpretation.

An approach we should adopt for patients affected by the opioid epidemic. The initial uncertainty that appears in any patient encounter arises between the presenting symptoms and the perception of those symptoms, as shown in the figure. We first attempt to understand the uncertainty which create the frame of reference, the perspective from which we manifest conscious thoughts, which includes existing information, past experiences, and the current observations. The interpretations that form emanate from that initial perspective, which go on to form our conscious thoughts that we then act upon. In the diagram, the larger circle on the bottom represents uncertainty. The two smaller circles overlapping each other and the larger circle are two interpretations we form out of the uncertainty, and the horizontal line running across divides the line between our subconscious thoughts and conscious thoughts.

The diagram itself is called a Euler-Venn Diagram, or EV diagram, which is used to explain similarities and differences among different concepts through relationships. And the diagram shows three circles to demonstrate the significance of understanding uncertainty as it relates to how we think. The parts where the circles overlap is a blend of interpretations, essentially where we are consciously uncertain what we think. Which is different from unconscious uncertainty, because we are reacting to thoughts we have already formed, from a frame of reference that we already created. And when we are aware we do not know, or are aware of being uncertain, we react based on that perceived uncertainty, which is a mix of two interpretations we already formed.

The larger circle on the bottom of the figure says uncertainty, which is where we develop our initial understandings. The smaller circle on the left says Pain and the smaller circle on the right says Addict. The regions where the smaller circles overlap the larger circle represents how we begin to understand the patient presentation. The overlap between the two small circles represents conscious uncertainty in interpreting the patient’s symptoms. If our frame of reference emerges from the uncertainty sphere into the overlapping section, that means based on what we understand, we are consciously uncertain how to interpret the patient’s symptoms. Most of the time, we have some predisposition in what we interpret, a frame of reference that forms within one of the spheres, outside of the overlapping regions. But even if we have some idea, some most likely perception, we still cast doubts on our thoughts. In those circumstances interpretations that emerge from the initial understanding permeate into regions of overlapping spheres.