When Healthcare Law and Ethics Conflict 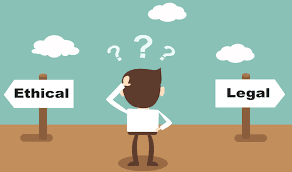 Most assume laws regulate human behavior to ensure that criminal acts or civil violations do not affect certain individuals. But laws have expressive powers as well, they can influence human behavior. And many laws hinge on the balance between regulating and influencing behavior.

If we are driving home from work, we instinctively know to stop at the red light and patiently wait for the light to turn green. If we are driving home from work to address an emergency, we may consider running a red light to arrive home sooner – justifying the breach of law due to the emergency. But we know that running a red light is dangerous and can result in a traffic violation, regardless of the circumstances – so it can be assumed that the law influences our behavior in situations where we may tend to bend or break the law.

But this is a simple example, and healthcare is anything but simple. It is quite complicated, something we come to find in many healthcare laws. As many of the laws in healthcare are more ethical frameworks than actual legal standards. Meaning they change over time to reflect the current ethos permeating healthcare.

A recent survey by Medscape found that physicians are more likely to under prescribe pain medications to patients, leaving the patient in pain from fear of legal ramifications – with nearly one in four primary care physicians admitting not to provide adequate pain medications. They knowingly fail to treat patients – refusing to treat conditions that just ten years they would have gladly treated – primarily due to fear of the law.

Physicians know that it is their obligation to provide patient care, and that by nature we should trust patients. But in practice, physicians default to distrusting patients because the law has superseded their sense of clinical responsibilities.

Nearly every community has heard stories of physicians who got raided by DEA swat teams, their patients terrorized, medical records seized, and practices ruined by media propaganda campaigns.

Most have blamed the 2016 guidelines released by the CDC, “Guideline for Prescribing Opioids for Chronic Pain.” In which the CDC urged practitioners to avoid increasing opioid doses for new patients above daily doses of 50 morphine milligram equivalents (MME). The guidelines were meant to be recommendations, general rules of thumb, that physicians and nurses could use while performing and documenting risk and benefit reviews of new patients.

However, instead of becoming a guideline, it became a law. And a controversial one at that – almost immediately after it was published. Despite major criticism, it was widely interpreted by physicians, hospitals, and the DEA as a mandate for hard limits on prescribing opioids — even for so-called legacy patients for whom long-term or high-dose opioids had already proven safe and effective.

Finally, in April 2019 the CDC advised against the misapplication of the guideline even though more than thirty states had already incorporated it into legislation in the years since its publication. At about the same time, the FDA issued a safety warning against rapidly tapering individuals off opioids or suddenly stopping their administration, based on known harms to patients.

But that did little to stop legislators from codifying what were clearly stated to be guidelines – controversial ones at that – into law.

In 2019, the American Academy of Family Physicians and other professional groups representing physicians called on politicians to, “end political interference in the delivery of evidence based healthcare”, noting that, “physicians should never face imprisonment or other penalties for providing necessary care. These laws force physicians to decide between their patients and facing criminal proceedings.”

A decision that a physician should never have to make. But when guidelines are codified into laws, they create conflicts between medical ethics and the law, and place undue burdens on select physicians – cultivating a culture of Medical McCarthyism in which physicians are literally blacklisted and targeted by pharmacies and the DEA.

The American Medical Association has come out against maintaining physician lists, condemning the use of “high prescriber” lists by national pharmacy chains to blacklist certain physicians and prevent their patients from having pain prescriptions filled.

But the voice of healthcare has been usurped by the voice of the law, as U.S. attorneys are not acknowledging these outcries and continue to send intimidating letters to “high prescribers,” warning them that their “prescribing practices may be contributing to the flow of prescription opioids into illegal markets and fueling dangerous addictions.”

This claim, however, is not substantiated by medical evidence. And study after study has shown that the opioid epidemic is fueled most by illicit drugs rather than the diversion of prescribed opioids.

So instead of creating healthcare law based upon medical studies, we have codified laws based upon controversial guidelines – conflating recommendations with mandates – that were clearly never meant to become law.

But in enacting controversial guidelines as laws, the DEA has effectively transformed the enforcement and adjudication of law into rule by executive fiat, a phrase recently reintroduced into popular lexicon by Supreme Court Justice Samuel Alito. Originally used to denounce the actions of an authoritarian king, executive fiat is a governmental decree – essentially, the enforcement of a rule by people who have absolute power to do so, regardless of a democratic process of checks and balances, regardless of due process.

Instead of a king making decrees, today we have federal agents manipulating the media, public perception, and interpretations of the law to coerce indictments and guilty pleas – replacing medical reasoning with fear.

Simply by declaring a national emergency, the DEA has justified influencing physician behavior to the point where many physicians would rather practice bad healthcare than suffer legal ramifications. And the ensuing effects are well known. Patients are suffering with untreated pain, chronic pain patients are discriminated against, and physicians have locked themselves under the presumed protection of defensive healthcare.

Laws are standard frameworks that hold true regardless of the circumstances. Guidelines and recommendations change as we learn more about healthcare and the underlying pathophysiology.

One is immutable, and the other adjusts as healthcare advances. Conflating one for the other violates the ethics of healthcare, and forces law and ethics to become incompatible.

When a law becomes bendable and changes healthcare behavior in a way that hurts patients, it is no longer a law. It is simply an outdated guideline that warrants immediate change.