What Happened to COVID-19 Testing? 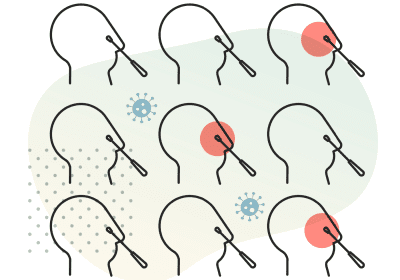 They are everywhere, ghosts in a shell. Many of them stained in the malaise that besets makeshift Halloween stores in November.

With vaccination rates at all-time high, testing centers are seeing fewer and fewer patients. Some retail pharmacy chains in certain parts of the country have stopped testing people altogether.

According to the COVID-19 Tracker database, COVID-19 tests fell by 10% in the second week of March 2021. But the number of positive cases also fell by 12%, which continues a now two and a half (2.5) month long trend of declining national positivity rates.

As with most things related to the pandemic, we conflate what is happening now with what will happen in the future. So when we see positivity rates dropping, and the number of vaccinations increasing, we assume testing is no longer necessary – or at least as important.

In effect weighing vaccinations against COVID-19 antigen tests – presuming that if we are getting vaccinated then we do not need to get tested.

Yet states continue to primarily use positivity rates in determining whether to lift economic restrictions and social distancing guidelines – whether to reopen businesses or to increase in-person occupancy rates for recently opened businesses.

Positivity rates are calculated a number of ways, but the Centers for Disease Control (CDC) has identified four broad methods through which states can calculate positivity rates:

While each state calculates positivity rates differently and at its own discretion, the four approaches describe the general methods used by all states. Each heavily configuring the total number of tests administered into the calculations.

While we can assume that higher vaccination rates equate to lower positivity rates – and the current trends certainly suggest as much – we cannot know with certainty what the true positivity rate is unless we continue to conduct the required number of tests per day – which varies based upon the population of each state.

Ideally, testing would increase with vaccination rates, in order to verify the lower positivity rates, but it is quite the opposite.

In the first two weeks of March 2021, the number of people tested decreased by one million each week. Previously this may not have mattered much, as multiple national databases have shown that over the course of the pandemic, declining testing rates have not correlated with decreasing positivity rates.

But a recent analysis conducted by Nephron Research over the COVID-19 Tracker database suggests a newly forming relationship. One that began when we started administering vaccines, implying that increasing vaccination rates have changed the association between positivity rates and the number of people tested – from having no correlation to being directly correlated.

While this trend may prove true in the remaining months of the pandemic, it is still too early to verify, as we have begun ramping up vaccination rates only recently, starting in January 2021. States are still in the middle of the relaxing the restrictions, using positivity rates to guide the timeline for this process.

If we are to optimize this process, ensure we thread the delicate balance of opening the economy while minimizing the number of unnecessary (or excess, avoidable) deaths, then we should be keen to maintain an accurate reading on the positivity rates. The precision in these policy decisions depends upon the validity of the data.

While the metric is flawed, the positivity rate is the best measure we have to determine the spread of the virus, and to predict the likelihood of a potential outbreak. Something we are starting to see in European countries, particularly in Italy, as the continent is immersed in a fourth wave of variant-driven COVID-19 cases.

And if past trends seen during this pandemic hold true, then what happens in Europe, will happen in the United States within a few months.

The positivity rates will reveal if and when this will happen. But the positivity rates are only as accurate as the number of people being tested, which makes it imperative that we continue to encourage symptomatic people to get tested, and not allow the recent perceived successes of the vaccines to lower our guard.

When we change how we collect data, we change the data itself, altering the validity of the data along the way. Perhaps positivity rates are no longer the best metric to determine whether to relax economic restrictions. But we will only know this if we continue to test for COVID-19, and continue to monitor the positivity rates as we have been throughout the pandemic.

Europe is mired in its fourth wave, and we have every reason to believe that what is going on there will happen here. We need to remain vigilant and continue to trace the positivity rates. This metric has proven in the past to be the most effective measure of calculating viral outbreaks, and the most valuable in gauging the effectiveness of social distancing policies.

If we hope to predict future trends in the coming months, then we should maintain consistent standards in how we populate the data throughout the pandemic, from start to finish.

So we can get to the end of the pandemic safely, and hopefully more quickly.