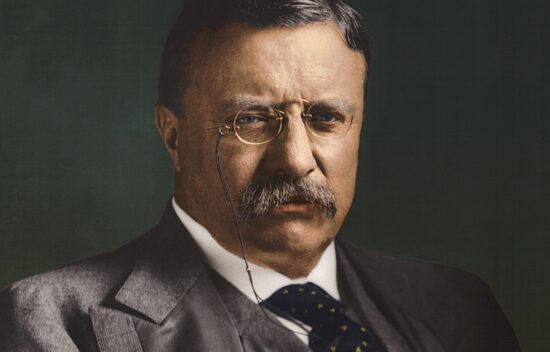 Theodore Roosevelt, the archetype of rugged individualism, once withstood a bullet wound in the chest to give a speech in front of a general assembly.

After he told his captivated audience of his recent injury, being shot mere minutes before he was set to speak, he reassured them that he would be fine, proclaiming, “it takes more than that to kill a bull moose”, before completing an abbreviated version of his set speech.

Such tales epitomize Roosevelt, the most American of American Presidents, who once marched uphill onto incoming gun fire during the Spanish-American War, who nearly died while on a post-Presidency expedition in the backwaters of the Brazilian Amazon basin, and who simultaneously altered American geopolitics and boasted America’s Naval superiority while carving a canal into the heart of Central America’s Panama.

The latter is considered a modern engineering marvel, and something that former President Trump has commended on multiple occasions. But the two men’s affinity for large scale construction projects is not the only thing they share. In fact, many historians have often compared the two, noting their similar penchant for the spotlight, bucking convention, and garnering staunch allies and enemies.

There is another similarity between the two, one shared among much of the population – a sense of individualism. But not traditional American individualism as we know it, the veritable can do attitude, but a specific type of individualism, one characterized by conscious disobedience.

This type of individualism has appeared among prominent thought leaders throughout American history. Henry David Thoreau advocated civil disobedience against what he termed unnatural laws, which in modern times manifests as resistance to overt injustices perpetuated by the government, whether that is suppression of human rights or systemic racism.

But this type of individualism also appears in more destructive ways, as seen in the perpetual rise and fall of counter-cultural movements. We saw strict Christian denominations of the nineteenth century often blur the distinction between austere and authoritarian. We saw organized crime bosses ingratiate criminality into the zeitgeist of American society. And we saw former President Trump turn an election loss into a nascent occult movement. One in which loyalty to a set of beliefs literally trumps any institution, political belief, or cultural affiliation.

This is the modern manifestation of the same individualism first espoused by Roosevelt, and now carried forward by Trump. A rugged individualism defined by disobedience, cynicism, and individual willpower over everything else. We lauded such notions when Roosevelt defied death and deferred medical care to speak. But such notions when taken to extremes, and permeated across society to be adopted among the masses, quickly fall from inspirational heights to cautionary depths.

This is precipice in which we currently find ourselves. A world mired in individualism, disobedient and discontent, zealously adhering to an ever polarizing set of beliefs – now codified by the term, Trumpism.

A world that has redefined healthcare policy, transforming mask-mandates and vaccinations into statements of individual free will. We tend to believe this is a pandemic-specific phenomenon, a largely fringe notion popularized over the course of the pandemic, that will subside once the pandemic has run its course.

We should be leery to think this way.

This modern manifestation of individualism initially arose before the pandemic, and was largely responsible for Trump’s political ascendency. It grew exponentially during the pandemic, and it remains ever pervasive so long as Trump looms large in the country’s ethos.

And this notion will continue to permeate healthcare post-pandemic, long after mask-mandates have been relegated to the history books.

Trumpism, post-pandemic will manifest as generalized discontent and non-adherence to traditional healthcare policies.

We will see patients bucking conventionally held notions of healthcare, challenging traditional medical care, and frequently turning to alternative forms of medicine. We will see a rise in counter-cultural medical practices, led by individuals posing as some combination of physician-priests eschewing traditional medicine for a more individualized, counter-cultural form of healthcare.

A similar trend arose during the Roosevelt’s administration that was subsequently rebuked by the Flexner Report in 1910. Commissioned by the Carnegie Foundation, and supported by Roosevelt, this report standardized medical research and medical care, paving the way for modern medicine and modern healthcare as we currently understand it. And for all its detractors, the report did much to standardize and regulate healthcare – for the benefit of patients.

Unfortunately, for all the similarities between Roosevelt and Trump, they have one difference – Trump, unlike Roosevelt, not only engages counter-cultural healthcare beliefs, he advocates and broadcasts them. Trump was the one advocating for UV therapy in the early days of the pandemic, and he had a dangerous tendency of aligning himself with self-serving soothsayers who promised all forms of quackery as therapy.

The implications of which were disastrous. We saw mask-mandates turn into town hall referendums on personal rights and vaccine hesitancy destroy any chance at herd immunity.

These counter-cultural beliefs will continue, inspired by Trump and spurred on by Trump’s insistence in conspiratorial beliefs.

We will see a rise in counter-cultural medications and generalized distrust in traditional medicine. Providers will have to convince patients to trust traditional medicine while treating them. And individualized conspiratorial beliefs will influence patient decision-making as much as the guidance of a provider.

Healthcare will be bound to the roots of this modern individualism, marked by discontent and disobedience, with different populations fixated on their own self of beliefs and disbeliefs – forming over time a new type of healthcare disparity.

One defined by Trumpism, post-pandemic.