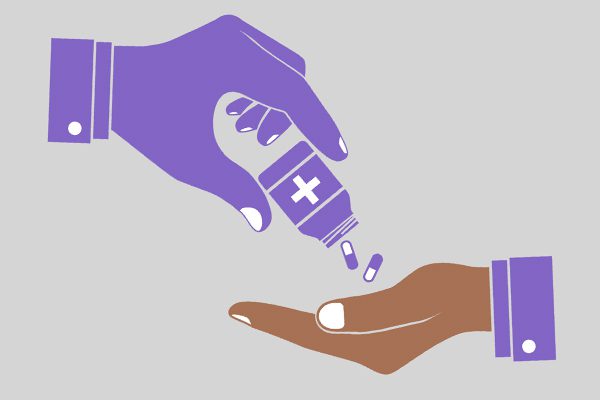 “From a clinical standpoint, he did the right thing – trust the patient and work to lower the quantity of medications”, Jennings says aloud, mostly to himself but also to his partner Martin, who scowls at the suggestion that the physician they are investigating, Dr. Orlando, may not have been prescribing medications illegally.

The two men hover over a shared rectangular desk, mirroring each other’s pose on opposite sides, with both hands pressed firmly on the table and the weight of their bodies evenly distributed between their legs and their extended arms. Their eyes dart from document to document as scores of papers lay dispersed over the desk, layer upon layer, covering the entire surface.

“Were any medications prescribed?”, Martin retorts with noticeable exacerbation. “Did he absolutely have to prescribe anything? Yes and no – done – that is a crime.” Martin fixes himself to stand erectly as he crosses his arm, prompting a side-eye glance from Jennings.

“Listen, prescribing is not a zero-sum game – it is not a ‘winner take all’. It is a mixed motive game, meaning they –doctor and patient – cooperate on some points, but not on others. Rather than focus on whether anything was prescribed or not prescribed, let’s look at the intention underlying the interaction – what was the motivation of Dr. Orlando – ”

“To illegally prescribe pills – ”, Martin interrupts, prompting an instinctive recoil from Jennings at the emotion underlying the words. “He’s a low life drug dealer masquerading as a physician”, Martin continues again reshuffling his posture as a reflection of his animation. Jennings takes an audible, deep breath, attempting to lower the escalating emotion from Martin, and speaks in a deliberate cadence.

“The basics of cooperation and noncooperation define the interaction”, Jennings continues, clearing his throat. “Let’s focus on where they interacted cooperatively and non-cooperatively, and determine the basis for criminality based upon that logic – how about that?”

Jennings looks directly into Martin’s eyes for any signs of a response, and takes an extra moment to observe any latent disgruntled feelings pent up in Martin’s body posture. After a brief respite, Jennings continues.

“The decision to prescribe was based on the undercover agent saying his leg cramps up, and his history of taking similar medications. Dr. Orlando did a basic overview work up, and then determined to prescribe – ”

“He simply put on a charade and then prescribed something without any legal documentation”, Martin interrupts again, breaking his silence, with much less emotional vigor this time around.

“Yes”, Jennings responds in stride, carrying the same urgency in his tone to match Martin. “Let’s look at the context around the prescribing. Previous cases looked at financial incentives – none – or an absence of a physical exam – which was present here – so we cannot rely on previous guidelines as a reference. And truthfully, most physicians are not stupid enough to blatantly run pill mills anymore. So we can’t just call it a charade and jump on this.”

Martin snorts just before churlishly responding, “so what are you saying – we just stop looking?”

“We change what we look at”, Jennings presses on, with an added emphasis in response to Martin’s tone of speech. “Where did they cooperate, where they did not, what was the basis for the decision, and how did the decision affect the overall care … ”

Jennings continues while Martin looks off, listlessly floating from document to document, seemingly listening but clearly disengaged. The debate between Martin and Jennings reflects an ongoing debate between how law enforcement should look at criminal acts in healthcare – through just the perspective of the act alone, or from the perspective of the entire context around the act.

Jennings is not so sure, much to the chagrin of Martin. Jennings believes that additional data is required prior to crafting the narrative of a criminal physician – some breach of clinical protocol, of a guideline violated, something – but absent any true clinical training or medical understanding, Jennings and Martin are left to piece a puzzle with puzzle-pieces lacking any properly defined edges. What constitutes a crime, a violation of civic duty when a physician makes clinical decisions based upon of trust?

With no red-flag, or obvious criminal act found, Jennings and Martin began looking to ascribe possible ulterior motives to Dr. Orlando – shifting their focus from specific acts to defining the criminality by defining the decision-making.

But the analysis so far implicates the opposite – that Dr. Orlando is observing good clinical practice. They first assumed that any patient-physician encounter requires a level of relationship building – trust – and then determined how the basis of trust, or cooperation formed. If Dr. Orlando cooperated with his patients to provide good clinical care, then there is no crime. If he cooperated just to provide medications – pills – then there is a basis for a crime.

“How do we define a basis for cooperation?”, Martin asks, not even attempting to hide his incredulous disposition. “Let’s just plant a few seeds that look good for the undercover video, show that the agent is faking for pills, and see if we can get this doctor to bite.”

Jennings rolls his eyes, not meriting Martin’s comment with a response. He attempts to change the course of the conversation with another audible deep breath, and begins a series of rhetorical questions.

“Why do physicians prescribe medications just on the basis of trust alone? I mean I trust my physician, but I’m a cop, and they know I’m a cop, so does that make the relationship different? Don’t physicians know the legal risk they are putting themselves in just by trusting their patients without requiring legal verification?

They know we’re watching them. If that were the case, and I was a physician, I wouldn’t trust anybody – I would just document everything and have a lawyer regularly review everything.”

“And this Orlando guy didn’t do that – so he’s a criminal”, Martin reasons, attempting to convince Jennings by manipulating Jennings’ line of reasoning. But Jennings remains lost in thought, and begins to shake his head slowly, now talking a bit more softly.

“By altering the basis of communication and redefining the patient-physician encounter, we change the natural behavior of physicians, we’re influencing the act of a crime. Which means we are entrapping by redefining the definition of a crime – but we can’t charge someone for a crime we help create …”

Martin rolls his eyes glaringly so that Jennings can see his frustration. But what Jennings realizes, and Martin fails to realize, is that law was never meant to influence healthcare. Law regulates healthcare without influencing healthcare.

And what Jennings is starting to realize – his eyes widening with the growing understanding – is that trust turns the patient-physician encounter into a nonzero sum game, whereas a traditional drug deal is by nature a zero sum game. The behavioral dynamics for a nonzero sum game are far more complicated and nuanced, and therefore warrant a far more sophisticated approach to investigate.

An approach Jennings realizes he does not have.

But when you are a hammer, everything looks like a nail. And for most agents like Martin, forgoing the complications and the nuances – it is simply about pounding away.