Fractals May Be The Missing Piece To COVID-19 Projections 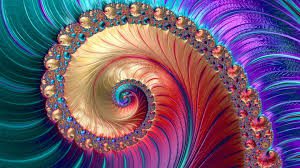 We have all seen them, the simple shapes that grow increasingly complex, piece by piece. What starts as a triangle becomes a six-sided star, and soon some type of a snowflake, and on it goes, ever more complex.

But beyond appreciating the beauty of the geometry, hardly anyone understands the mathematical modeling that defines its expansion. Many are not even sure what they are called – fractals.

And they represent infinitely complex patterns that appear similar across different scales, which is formally called self-similarity – meaning one part of the pattern looks similar to the entire pattern itself – and they are created by repeating a simple process over and over in an ongoing feedback loop – in the process, creating something complex.

Fractals have been studied in a diverse range of fields from evolutionary biology to astrophysics and have been remarkably relevant in describing the most complex, chaotic systems found in the universe.

So it should come as no surprise that fractals might prove useful in understanding – COVID-19.

A disease defined more by what we do not know than what we do know, creating an uncertainty that we have been all too ready to fill with ad hoc solutions, false narratives, and unsupported theories.

We tout medications only to pull back the parade at the last minute. We attribute the weather, or a vitamin deficiency, or a mix of co-morbidities, but in the end, whatever we believe to be a cause or a significant factor is as easily proven as disproven.

And what happens when you conflate causation with correlation, as things that may appear to relate do not necessarily have to relate directly – like cause and effect. Sometimes the relationship is more complex, which is what we are starting to discover with COVID-19.

But precisely within that complexity lies insight that may help us better understand, and hopefully better fight against COVID-19.

Epidemiologists have long known that the pattern of viral spread, the dispersion, may be the critical factor in elucidating the confounding factors responsible for the inconsistency in the different correlating factors. In fact, we have known that the coronavirus spreads through discrete, unpredictable super-spreader events, which means the virus spreads less like the traditional influenza virus, and more like a rapid, geometric progression.

But we continue to study correlating factors as though the virus has a traditional linear spread.

And it is this disparity between the patterns in which we assume the virus spreads – and model accordingly against – and the actual pattern of spread that has led many projections to revise and re-revise itself in a seemingly never ending display of iterative recurrence. Something the mathematical models behind fractal geometry may be able to improve upon.

Using fractals and fractal-based models to study epidemics is nothing new in epidemiology. In fact, many research facilities have studied previous viral outbreaks using such techniques and have found it to be quite accurate. Even recently, studies evaluating the mutation patterns among different COVID-19 viral strains have found fractal patterns of dispersion within the geographic specific mutation patterns that may explain why certain regions of the world are affected more than others.

Which begs the question as to why we have not applied this framework to public policy or the widely publicized projection models.

Many of the these highly touted models use more traditional statistical models that attempt to correlate different factors together to find a linear pattern, like cause and effect.

In fact, the original version of the model from the Institute for Health Metrics and Evaluation (IHME) used this type of model. But since traditional statistical models do not include transmission patterns, the long term value of such projections are limited and often inaccurate – as we have already seen.

More sophisticated models, like mechanistic models, like the Susceptible–Exposed–Infectious–Recovered frameworks, include transmission patterns, and can make more accurate long-term predictions. Unlike purely statistical models, mechanistic approaches include nonlinear feedback — including the nonlinear, illogical behavior patterns that define us as humans. Because these models reflect the underlying transmission process, the parameters driving it can be modified to test how the pandemic may change under various circumstances, including super spreader events and economic restrictions.

But both models are highly susceptible to uncertainty and are only as accurate as our current understanding of the virus.

Fractal models can be of use here, as they have proven quite robust even under conditions of high uncertainty, and can be applied to existing models or used to develop entirely new approaches to predicting viral spread. A technique mathematicians have used to improve prediction models for other fields, including city design and layout as a function of population growth, a similarly complex projection comparing geographical and economic constraints within a dynamically moving and growing population.

As mentioned, fractals operate through a process of self-similarity. So if we see fractal dispersion models in the mutation patterns of this disease, it makes sense to apply fractal models to policy decisions as well.

Such techniques may be useful in predicting projected ventilator need, or social distancing precaution based upon the dispersion pattern and the likelihood of super spreader events. We need to create a unified model of dispersion, a veritable supersymmetry within all COVID-19 patterns of dissemination, that reflects a consistent approach to understanding the virus, particularly in the upcoming, highly uncertain months.

But within the uncertainty are complex patterns defined through their distinct patterns of dissemination, underlying patterns that correlate different aspects of COVID-19 – from public policy to biochemistry – through a complex pattern, a series of self-similar fractals reflecting one another, mirroring the all-encompassing broader pattern – itself a fractal.

Understanding the model that forms the basis for this pattern would help us better prepare for the upcoming months to years ahead, and possibly save numerous lives in the process.

A mesmerizing proposition – almost like staring at a fractal.