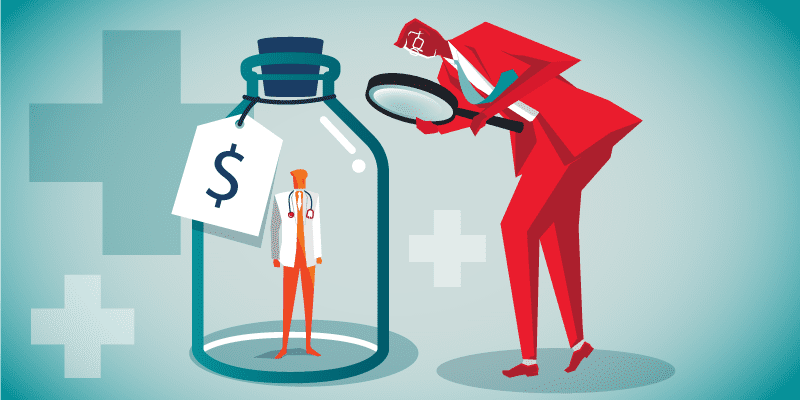 Rome ceased to be Rome when the Emperors ceased to rule.

When the Emperors became figureheads for ambitious generals and scheming politicians, Rome was no longer Rome.

An empire built upon the strength of a philosopher king, a man of the Republic, first among equals, then transformed into a bureaucracy rife with duplicity and intrigue.

The long fall of Rome is filled with such stories, in which principles and ideals gave way to politics and corruption. The term byzantine, which historians use to describe the latter centuries of Rome, a period marked by such transformation, is also used to characterize someone or something as deceiving and cunning.

The term can also apply to how the medical issue of price transparency has been co-opted by the legal industry.

Originally proposed during the Trump presidency by the former administrator of the Centers for Medicare and Medicaid Services, Miss Seema Verma, the goal was to empower patients by making the price of drugs and clinical services available to the public. Miss Verma wrote an op-ed in 2019 describing her position – “You wouldn’t buy a car without knowing the price. So why are health care prices hidden?”

Patients, once given the financial data, had little ability to make sense of it, and simply resumed receiving clinical care at healthcare institutions they were familiar with. It would appear that calculating the cost of care is a bit more complex than purchasing a car.

And with all things complex, there are unintended consequences. The push for price transparency came with its own documentation requirements in listing the prices. Some institutions were more forthright than others. Some institutions contextualized costs selectively in order to make certain aspects of care seem cheaper than their competitors.

Medicare responded by threatening sanctions and lawsuits against healthcare institutions that gamed the system or failed to participate entirely. The institutions and their lobbying organizations responded with lawsuits of their own. And so the transformation began.

The goal of transparency transformed into a burden of documentation.

The first and most prominent example being the lawsuit in which the American Hospital Association (AHA) sued the Department of Health and Human Services (DHHS). The AHA eventually lost, even after appeals, when the appellate court ruled:

“The [American Hospital Association] does not dispute that the government has a legitimate interest in promoting price transparency and lowering healthcare costs. Instead, it contends that the rule bears no reasonable relationship to those governmental interests because the required disclosures ‘may not be immediately or directly useful for many health care consumers,’” the judge wrote. “But…the secretary, relying on complaints from consumers, studies of state initiatives, and analysis of industry practices, reasonably concluded that the rule’s disclosure scheme will help the vast majority of consumers.”

The AHA argued that price transparency does not help patients make clinical decisions. But the courts, relying on consumer complaints and government reports, ruled otherwise.

Interestingly, the AHA was right. Price transparency does not influence patient decision-making as to where they choose to receive clinical care. Something verified repeatedly in recent clinical studies.

But in transforming patients into consumers, both the AHA and DHHS miss the mark – patient care cannot be understood through traditional consumerism principles. In fact, neither side discussed how patients would use the data. They just erroneously assumed patients make decisions like consumers.

The ruling paved the way for the legal industry to enter, further transforming the policy away from its original intentions and creating a new venue for legal liability.

Now healthcare institutions face legal liability based upon their reporting standards, regardless of whether patients use the pricing data.

And the legal arguments center on the extent to which institutions must report their prices. A few days ago, the U.S. Chamber of Commerce and a Texas affiliate withdrew a suit that would have blocked certain parts of the required price disclosures. This came in response to a decision by the Biden administration to defer certain price disclosures which were the focus of the suit.

The suit hardly mentions anything about patient decision-making. It only focuses on the documentation burdens coming from price disclosures.

The Pharmaceutical Care Management Association (PCMA) has also filed a lawsuit against the DHHS on similar grounds of documentation burdens. And many more lawsuits will be filed once all the provisions within the price transparency rule come into effect in 2022.

This would complete the transformation, changing an idealistic medical policy – intended to empower patients – into a legal liability to be adjudicated ad nauseam in the court of law.