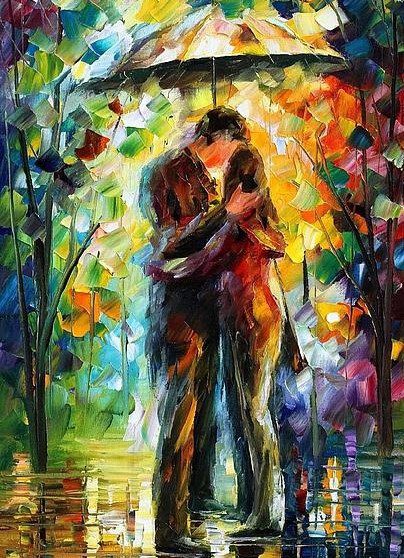 Droplets of sweat accumulate and remain affixed atop the crown of Evan’s head, forming a conspicuous translucent ring accentuating the light of the evening sun. A plaque of purplish, mottled skin grows and plateaus upon the side of Sarah’s face, taking up estate in the space between her eye and ear, contrasting the red, hazy hue of the evening sky.

A plaque that appears on the side of her face that faces towards Evan, something he pretends not to notice as the two walk hand in hand along the well-paved trail of a nearby forest preserve – Sarah and her plaque, and Evan and his sweat.

Every individual is uniquely odd, but this couple is perfectly odd as each one’s idiosyncrasy has a particular synchronicity that has, until now, felt a bit off, a bit forced, but finally appears to align with the setting of the evening sun.

Sarah, naturally fit, yet painfully unathletic, detests the sight of sweat and will go to great lengths to avoid it at all. Evan, neurotic by nature, has dealt with acne for most of his life, that for the most part has finally resolved, but not without leaving the mental scars of self-consciousness that manifest at the site of any dermal discoloration on anybody.

They both have flaws that they have noticed in the other, and for many that would have ended their relationship before it had even begun – had these flaws not appeared until long after their relationship began. And the natural chemistry the two felt immediately and developed quickly formed a bond strong enough to – at least attempt to – overlook certain physical flaws.

Which is why they are here, hand in hand, enjoying the silence, yet left with no conversation to fill the void. Alone, finally enjoying each other’s company, yet left to confront the flaws they have tried to avoid.

“It’s quite muggy out tonight?”, she quips, looking ostensibly down while stealing glances at Evan.

“I haven’t noticed”, he replies blankly, seemingly unaware of her subtext.

“Right”, she responds, wrinkling her nose and rolling her eyes out to view the landscape.

Sarah hesitates to respond, her eyes betraying a budding tension. She feigns a palpable silence, pretending not to hear while walking in stride – until Evan repeats.

“I’m sorry, Sarah”, Evan says softly, keen not to appear aggressive, “but I thought you said something.”

Sarah prolongs the moment for as long as she can, until she sees a large tree a few yards off the trail surrounded by a large, grassy clearing – and widens her eyes at the serendipity of the moment.

“Right here”, she blurts, poorly attempting to divert her original intent. “There is a tree we can go under”, she continues, now shifting into an aura of intimacy, “it will be so romantic, just the two of us, alone, under the tree…”

She lets her words drift into the silence, knowing her tone carries the intended innuendo. And the two seamlessly veer off the trail in tandem, making their way through the clearing. Evan sizes up the tree, impressed by its height and vast branches – and through his awe, he breaks the silence.

“Whenever I see trees this tall, I always wonder how old they are. Sounds a bit odd, but I think of history when I see trees that look like this”, he says, tracing the tree’s silhouette with the index finger of his free hand.

“That’s not odd at all, that’s quite romantic, actually”, Sarah responds reassuringly.

“I love history. All the ancient cultures, forgotten civilizations – so intriguing – different, yet similar. Did you know in antiquity, purple was the color of royalty?”

“I don’t care much for history”, Sarah responds curtly, a not so subtle gesture ending the conversation, which Evan obliges to knowingly, responding only through raised eyebrows and puckered lips, renewing the silence as they continue.

Less may be more when it comes to what they say, but with each misstep and misspeak, the more the relationship grows – as within the awkwardness forms a nascent fondness, and within the comedy of errors, an affection for the gesture.

While their words may have faltered, throughout the walk their hands never parted, and their feelings never wavered. As they approach the tree, they silently feel the flutters of newfound love.

Flutters that initially vibrate on their own, oddly overlapping over idiosyncrasies, eventually synchronizing into waves of harmony. With each step closer, the two come together, and soon the flutters they feel merge into a fledgling spark, igniting an anticipation that grows within the silence.

Once at the base of the tree Evan turns to Sarah, holds her other hand, and the two stand inches apart, staring into each other’s eyes. Under the tree’s darkened shade, Sarah no longer sees Evan’s sweat, nor does Evan see Sarah’s plaque – they only see their other half, the missing piece that makes them whole.

“I meant that as a compliment – the purple thing”, Evan whispers.

“I haven’t noticed”, Evan murmurs, revealing a grinning smile bursting at the seams – a smile of knowing but not judging, of understanding and accepting – “and what about my sweating and acne history…”, he attempts to continue, but finds his words trailing off, and his eyes darting downwards.

“I don’t care much for history”, Sarah whispers flirtatiously, revealing a mesmerizing look of seduction – a look that comes from a balance of confidence and vulnerability, from reciprocated love.

Without another word, Evan leans in and kisses Sarah, and the two close their eyes, losing themselves in the moment, finding the glimmerings of love sparkling anew.

The law of attraction states that you attract what you become, but the rule of love states that you overcome what you fear. And as Sarah and Evan now hold each other tightly, lips still pressed, bodies tightly caressed, they realize that while their attraction has brought them together, their love is what makes them one.